We are excited to announce the release of Sync Preview 3, the final preview release of Zotero 1.5 before the initial public beta.

Along with a host of bug fixes, optimizations, and general improvements to Zotero’s syncing features, Sync Preview 3 includes new capabilities for rich-text editing of notes. Users can now take advantage of a wide range of rich text and HTML markup inside their notes. This feature comes through integrating the open-source WYSIWYG XHTML editor TinyMCE into Zotero. 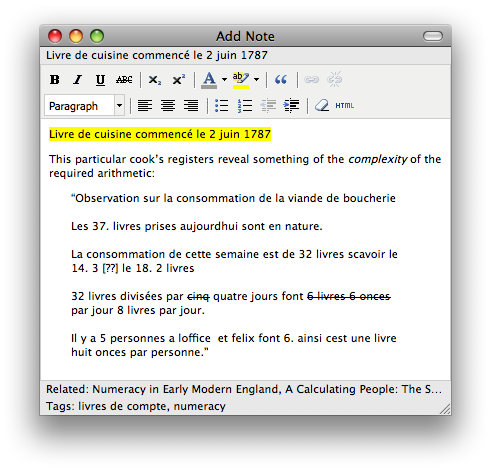 Users can now italicize, highlight, change colors, and superscript or subscript their text, as well as use semantic features such as block quotes to better separate their own writing from quotes and ordered lists to create nested outlines. Users can also edit the raw HTML of notes for full control over the markup.

This entry was posted on Friday, October 31st, 2008 at 5:51 pm by Trevor and is filed under News. You can follow any responses to this entry through the RSS 2.0 feed. Both comments and pings are currently closed.