You are here: start > kb > legal_citations

Zotero has only limited support for creating citation for US and UK legal cases and legislation. Support for legal citations from other jurisdictions is even more limited. For legal scholars or researchers making heavy source of legal sources, we recommend considering Juris-M, a community-driven unofficial version of Zotero specifically designed for compliance with legal citation requirements.

While we recommend Juris-M for heavy or frequent legal citations, it is possible to create proper citation for basic legal citations in Zotero, particularly if only a few such citations are needed.

The two main item types supported for US legal citations are cases and legislation (“Statute” in Zotero).

The most common norms for US legal citation, as prescribed in the Bluebook and followed by most general purpose styles like the Chicago Manual of Style distinguish between citations to cases that are reported in federal reporters and unreported cases. Zotero's citation styles distinguish between these two based on the presence or absence of a reporter in the data. 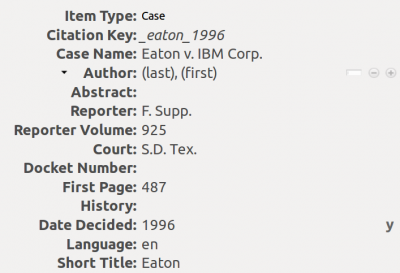 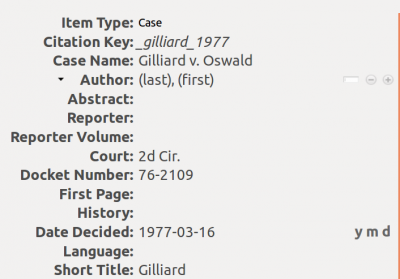 Citations to cases reported from databases like WestLaw or Lexis are not currently properly supported. 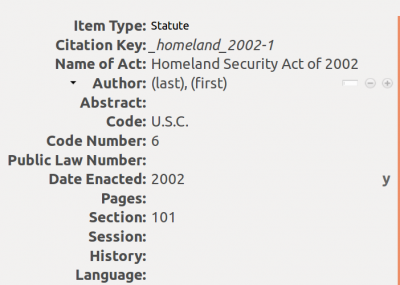 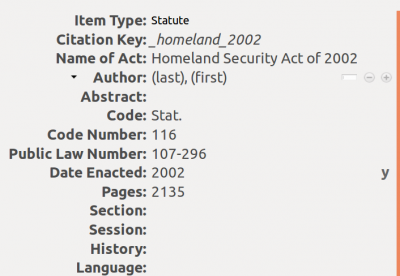 By far the most common legal citation style in the UK is OSCOLA, the Oxford University Standard for Citation of Legal Authorities. The citation style for OSCOLA available in Zotero was commissioned by members of the Oxford legal faculty and is able to produce almost all item types listed in the guide, but does require very specific (and at times somewhat idiosyncratic) data entry in Zotero. To help with this task a public Zotero group contains sample references based on the examples given in the the OSCOLA guide.

Similarly, the Australian Guide to Legal Citation (AGLC) is the dominant legal style in Australia. The AGLC style available in Zotero has been written to accommodate almost all item types within AGLC, using similar data-entry conventions as for OSCOLA. A public group with AGLC examples is forthcoming.